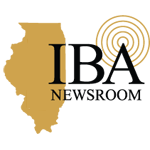 News Release from Illinois Press Association
SPRINGFIELD – One familiar face at the Illinois Press Association is retiring and another will succeed him.
IPA Board of Directors Chairman Don Bricker announced that Sam Fisher is retiring as the organization’s president and CEO, effective Sept. 1. Fisher has been the IPA’s leader since 2017.
Bricker also announced that the IPA Board has voted to appoint Donald M. Craven, longtime legal adviser to IPA membership, to be the next president and CEO. Craven has provided legal counsel to members of the IPA and Illinois Press Foundation for nearly four decades. He was interim president and CEO of the IPA from 2009 to 2010, and again in 2017 until Fisher was named to the position.

“I look forward to leading the great staff at the Association and Foundation,” Craven said. “The staff is a relatively small group, much smaller than in the past, but to call them talented is an understatement. They know their jobs, they know the membership, and they know (and like) each other.

“Having the opportunity to help them help the IPA is an honor. We have the task of preserving where we are and what we have, while at the same time working to further expand existing programs such as Capitol News Illinois and Public Notice Illinois. We will continue to have the same fights in the General Assembly on legislation impacting the press and public notices, and we will hopefully continue our success under the dome.”

Craven currently operates a general practice law firm with a concentration in media and government law in Springfield. He has been with the firm since 1986, when he joined his father, former Illinois Appellate Court Justice James C. Craven.