By 1962, Cook County alone had 208 courts: circuit court, superior court, family court, criminal court, probate court, county court, twenty-four city, village, town and municipal courts, seventy-five justice of the peace courts, and 103 police magistrate courts. In addition, there were seven supreme court districts numbered from south to north and four appellate court districts numbered from north to south. For example, the First Supreme Court District was in a part of the Fourth Appellate Court District and the Seventh Supreme Court District was in a part of the First Appellate Court District. In today’s system, as shown below, there are three levels of courts: circuit, appellate, and supreme, all operating within clearly defined geographical boundaries. The circuit court is a court of original jurisdiction which is divided into twenty-four circuits. Each circuit is located in one of five appellate court districts. Cases enter the circuit court via the circuit clerk’s office in a county of the circuit. Cases may be appealed to the appellate court in the district containing the circuit court, or, in certain circumstances, directly to the Supreme Court. After an appellate court decision, parties to the case may seek discretionary review by the Supreme Court. Supreme and appellate district and circuit maps are found in their respective sections of this publication. 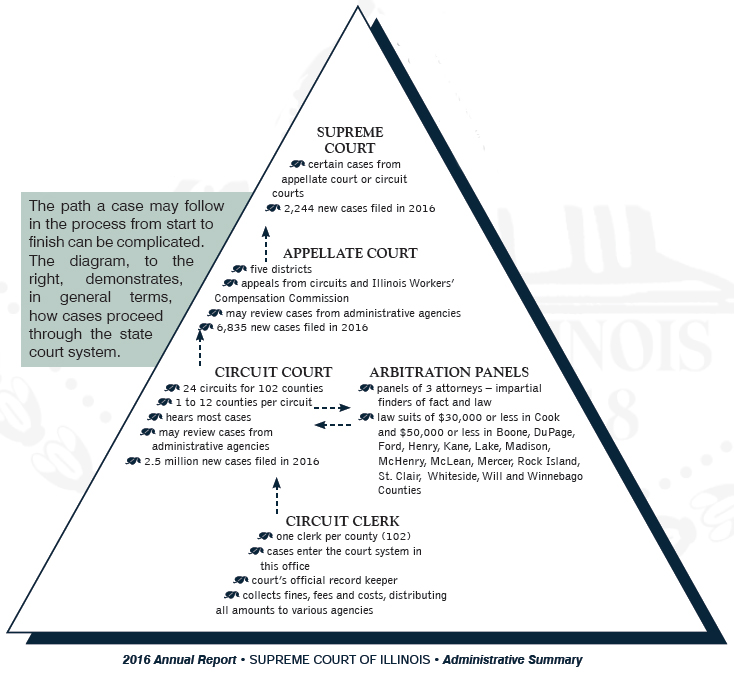